Whenever someone mentions Sonargoan, it’s very likely that he’s referring to Pan Pacific Sonargoan, the luxury 5-star hotel in Dhaka. What most people don’t know is about 25 km away from Dhaka lies the former capital of Bengal, the great historical city of Sonargoan. It’s not their fault either — other than Shipakarja Jainul Adedin, no one, no goverment ever took any initiative to protect and promote the great heritage of this this city. Pathetic, but true.
On the entrance to Sonargoan Rajbari is the famous sculpture of bull wagon by Jainul Abedin, which symolises toil and struggle. Jainul Abedin has always been one my favourite artist and I took a chance to get a pic of mine infront of the sculpture: 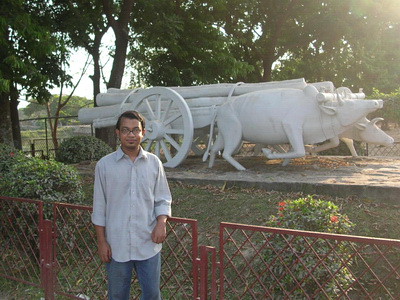 Just a few steps ahead to the left is the 2-storied palace, or the Rajbari, which is now being used as a museum: 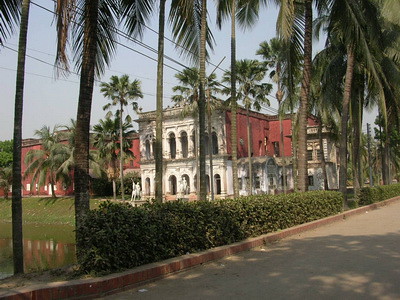 The palace has over 100 small rooms, and it’s completely like a maze inside. All the rooms are of same size and design, and now they are home to different cultural and architectural masterpieces collected from different parts of Bangladesh. I was told by my guide that this palace was used by few rulers, including the Hindu Jamidars who ruled during the British regime. It’s open for visitors from 10:00 to 17:00 everyday, except for Thursday.
Brief history of Sonargoan, as told by Dr. Abu Sayeed:
Sonargaon, which literally means “golden village” in Bengali, was the capital of the Banga province or Eastern Bengal, which was one of the three political units of this territory during the Delhi Imperial rule. In 1338 Fakhr-al-Din-Mubarak seized the provincial government of Sonargaon and declared himself independent from Delhi and was the first independent Sultan of Bengal.
In 1352, he was overthrown by the Sultan of Gaur Ilyas Shah, and from this time Sonargaon formed a part of the independent kingdom of united Bengal until the advent of the Moguls (1575).
In the reign of Akbar, it was the chief city of Isa Khan, who maintained his independence for several years. After Isa Khan’s death it became a part of the Great Mogul Empire. The decline of Sonargaon started with the establishment of the Mogul capital in Dhaka in 1608, and with the conquest of the kingdom of Isa Khan by the forces of Islam Khan in 1611 it became one of the Sarkers of the Bengal Subah, losing its former prestige forever.
The history of Sonargaon for the next two hundred years until the establishment of the commercial belt of the East India Company in Panam is still unknown to us. The colonial city of Panam came into being in the nineteenth century and continued to flourish till the end of the Second World War.