It took eight long hours to reach Khulna, the so called industrial capital of Bangladesh. The 335 kilometers journey wouldn’t have been so boring and tiresome if the Volvo service of Green Line was better. Their AC acted weird, the TV blew up, the seats were uncomfortable, the mineral water had a bad odour, and the guide never apologised despite of so many problems. If I wasn’t carrying my iPod, then I would have surely died of boredom. A good lesson learnt, I’ll never ride on Green Line bus again. 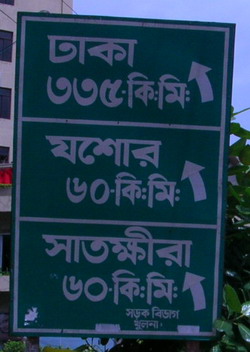 I checked in at Hotel Royal, the best hotel in the region. Their services were of international standards, but surprisingly the room rent wasn’t too high. The room was well groomed with international standard fixtures, the bed was comfy, the room service was quick, and the room attendants appeared well trained. They have a bar too.
I roamed around the town, visited the New Market, but I wasn’t too impressed. Despite being the divisional head quarter of the division, the city was much smaller than I expected. It’s not too developed either. There were handful of cars in the road, and the buildings looked pale. Load shedding is a major problem of the city dwellers. Khulna city had nothing that can be compared to Dhaka, not even with port city Chittagong. Just imagine what kind of city it is where the shutters of shops get closed by 9 PM!
Just a few observations: 1. The dialect of Khulna people isn’t too difficult to understand. 2. The rikshaw fair is pretty cheap. 3. People of Khulna seems to be too obsessed with Hazrat Khan Jahan Ali, the 15 century Islamic religious leader and a ruler. Roads, schools, shops, buildings, companies, and a lot of installations are named after him.