According to a Technorati tool named “Bloglebrity“, I’m classified as a “D” listed blogger. According to this tool, this blog is categorised under the “Low Authority Group”, which means:

“The average blog age (the number of days that the blog has been in existence) is about 228 days, which shows a real commitment to blogging. However, bloggers of this type average only 12 posts per month, meaning that their posting habits are generally dedicated but infrequent.” 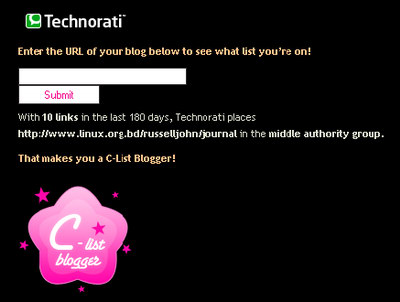 I got promoted to the “Middle Authority Group”, which means:

“This contrasts somewhat with the second group, which enjoys an average age not much older than the first at 260 days and which posts 50% more frequently than the first. There is a clear correlation between posting volume and Technorati authority ranking.”