If you’re my friend or colleague, then you already know my level of IRC addiction. I’ve been spending most of my tube time socialising on DALnet since 1999, though I first tried it two years prior to that. To be honest, my first impression about IRC wasn’t too good — but later I found myself hooked up to it and there was no way back. 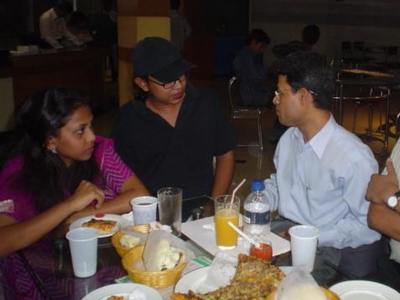 I’ve spent countless days and nights on maintaining #Mastermind, making friends, trying to get operator access on as many channels as possible, learning mIRC and Eggdrop scripting, and doing all those crazy stuffs. I still have more IRC friends then real life ones, with whom I’ve had some of my most amazing experiences.
Since it’s a virtual community, the users doesn’t really get to meet each other often. Usually meetups happen on one to one basis, and sometimes in groups of limited number. Only few meetups or get together parties in a truely “grand scale” were organised till now, but sadly I couldn’t join any of them. However, today was my lucky day.
Sakif Ahmed of IRC4Fun Network and his friends threw a party at Swarma Palace in Dhanmondi, and I was thrilled to meet a good number of DALnet users with whom I’m been chatting for years. It was particularly exciting to meet Addler, |aZy_|iZaa^, MAN__, sakifahmed, Tankibazzz, MonoroM, Artcell, NeelOnjona and my old friend DaarKak. We all had a rocking time together!
I thank the organisers for throwing this party — it gave us a great opportunity to meet the fellow chatters all under one roof! I hope to meet more people on the next party!
IRC stands for Internet Relay Chat, which is a virtual meeting place where people from all over the world can meet and talk. This multi-user chat system was written by Jarkko Oikarinen in 1988, which makes it a protocol older then the World Wide Web (defined and explained in RFC 1459). More information about IRC can be found on IRChelp.org.