Over 10,000 youngsters were present at Gulshan Youth Club playground to witness the first ever Anti-Corruption Youth Concert in Bangladesh. It was organised by Transparency International Bangladesh (TIB) in order to create awareness among the youth of our generation against vices such as corruption which is manifested in almost all the sectors of the country. The slogan of the concert was “durjoy tarunno durnity rukhbei” which means “unconquerable youth will confront corruption”. 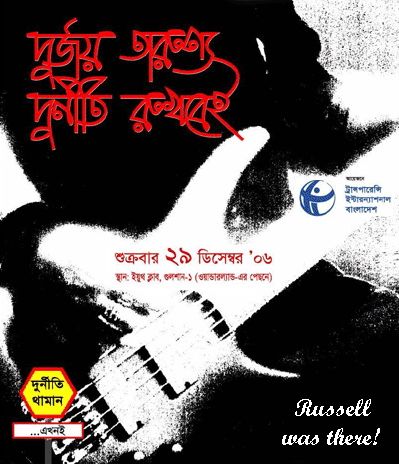 Overall, it was a good concert. The sound system was okay, so was the security with enough armed police. Channel I recorded the entire program, whereas Radio Foorti and Radio Today telecasted live. Refreshments were available, coffee was sold for 3 taka per cup, burger and sandwich for 40 taka, hot dog and fountain coke for 15 taka. Two third of the crowd was under the age of 21, with a significant number of bosti people. Did I mention that the entry was free of cost?