The word “photography” is derived from the Greek words “phos” (φως), meaning “light”; and “graphis” (γραφις), meaning “to draw”. This word was first used by German astronomer Sir John F.W. Herschel in 1839. By definition, it is a method of recording images by the action of light or related radiation on a sensitive material.
On a bright summer day of 1827, French scientist Joseph Nicéphore Niépce (1765-1833) obtained the first fixed photograph, which you can see below (click on it to enlarge): 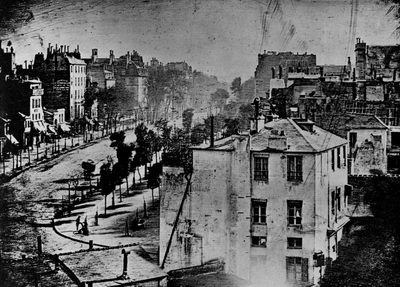 This 179 years old famous picture is known as “Boulevard du Temple”, and it took an exposer time of eight hours to capture it. Due to the high exposer time, he was unable to capture the hurrying figures and the moving traffic in this busy street of Paris. Only a man who had to remain still while his shoes were polished by a boot-black, was completely captured on Daguerre’s silvered copper plate.
About the same time, French artist and chemist Louis Jacques Mandé Daguerre (1787-1851) was experimenting to find a way to capture an image. It took him another decade to reduce the exposure time to less than 30 minutes, and at the same time keeping the image from disappearing. He developed a more convenient and effective method of photography, naming it after himself — the Daguerreotype.
In 1839, Daguerre and Niépce’s son sold the rights for Daguerreotype to French government, and published a booklet describing the process. The age of modern photography was born.
Types of Cameras
Based on the way they are focused, cameras can be classified in four major types.

The disadvantage of this type is camera is that it suffers from parallax error. To understand what it is, let’s look at the following picture:

As you can see, what you see through the camera’s viewfinder and what the lens records on the film is not the same. This “difference” is known as parallax error. However, on the expensive and high quality Range Finder cameras this error is automatically compensated.

Advantage of these type of cameras are:

Twin Lens Reflex Camera
These cameras has separate identical lenses for viewing and taking pictures, one over the other. The top lens is for viewing (image reflected off a mirror onto a viewing glass) and the bottom lens is the actual taking lens (image exposed to the film). These are usually 6×6 (120/220 film) format cameras and were very popular in the 50s and 60s and even through the 70s. A Twin Lens Reflex camera is a great tool with which you can learn composition, especially if there’s a grid on the focusing screen.

Large Format or View Cameras
These cameras consists of front and rear standards, joined by a flexible light tight bellows. Due to it’s weight, this type of cameras are to be used on a tripod. Large format films are also to be used.
Advantages of these cameras are:

Photography Medium
135 films:  These are the most popular and widely used film format today. Also known as 35 mm films.
120 films:  These are 6 centimeter wide and 72 centimeter long roll films. Used for medium format photography.
220 films:  These are 6 centimeter wide like the 120 films, but double in length — 144 centimeters.
Digital:  Uses a digital camera to electronically capture and produce images using a CCD (an electronic light sensor).
Tip for film camera users: print the pictures within three month of developing the film. Image quality will start degrading after this time period.
Photographic Process
For negative:

Words of Wisdom
Keep this in mind before taking pictures:

On the next part of Definitive Guide to Photography, I’ll talk about different parts of camera, aperture, shutter speed, focusing, focal length, depth of field, and lenses (normal, wide, telephoto and zoom).
Thank you for reading!