After comparing all the available ultra compact digital cameras on the market, and I finally bought myself a Canon Digital IXUS 70. This credit card sized gem is an upgrade of Digital IXUS 60, featuring 7.1 megapixel CCD sensor, DIGIC III image processor with iSAPS technology, 3X optical zoom lens, 2.5″ LCD display, ISO range of 80 to 1600, and less than an inch in thickness! 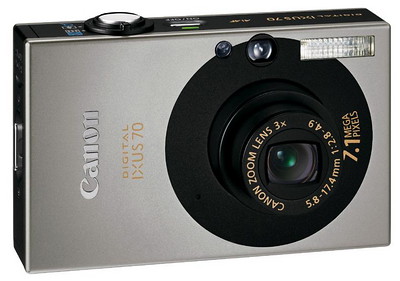 Other than the size what attracted me the most is the face detection function, which automatically locates human faces in a shot and adjusts the autofocus, exposure and flash to provide the best results. Experts say that this is the next best thing to the image stabiliser function, which this camera lacks.
Here are some stuff about the camera that you guys might want to know about:
Memory card: You can use MMC, SD, or SDHC cards with this camera. A 32 MB SD card is included with the pack, but using a 512 MB or 1 GB is recommended.
LCD display: The 2.5″ silicon TFT color LCD unit is large enough. I bought a screen protector for myself, and so should you.

Battery: The rechargeable lithium ion battery (model: NB-4L) seemed to last comparatively longer than the cameras using AA batteries. It takes around one and half hour to recharge from fully depleted state.
Video recording: Capturing is smooth and can record upto 4 GB at a maximum resolution of 640 x 480 pixels at 30 frames per second. Upto 4 GB of videos can be recorded (compared to 1 GB limit of the it’s predecessor IXUS 60).
TV output: You can connect the camera to your television with the supplied AV cable to view the photos and watch the videos. The image sideshow feature comes very handy in this case.
Released in March 2007, this camera is known as Digital IXY 10 in Japan and PowerShot SD1000 Digital ELPH in Europe. If you’re a Canon fan (or not) and want a light-weight pocketable camera, then get one for yourself! I’m sure that you won’t regret!