Location: German Club, Gulshan 2, Dhaka
Time: 20:45 onwards
State of mind: Content
German band Lychee Lassi started playing in 1998 and made a name for themselves with their debut EP Speed, which came out in 2000 and was named “Record of the Month” by TIP Magazine. They have gone on to play gigs all over Europe at clubs, open-airs, and festivals, and tonight they played in front of a live audience in Bangladesh for the first time. I really had a good time at this electronica-jazz fusion concert, and so did my friend Rafiq who accompanied me. 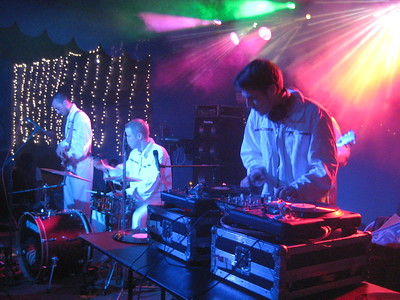 Due to stupid government regulation the bar at the club was closed, so we opted for Pepsi and Fanta. It’s getting relatively harder to get alcoholic beverages in Bangladesh… the scenario is pretty ugly.
Anyways, here’s the line-up of Lychee Lassi: Dirk Berger on guitar, Beat Halberschmidt on bass, Roland “Roy” Knauf on drums, and DJ Illvibe on turntables. They are flying to India tomorrow to perform at Egmore, Chennai, so good luck to them!