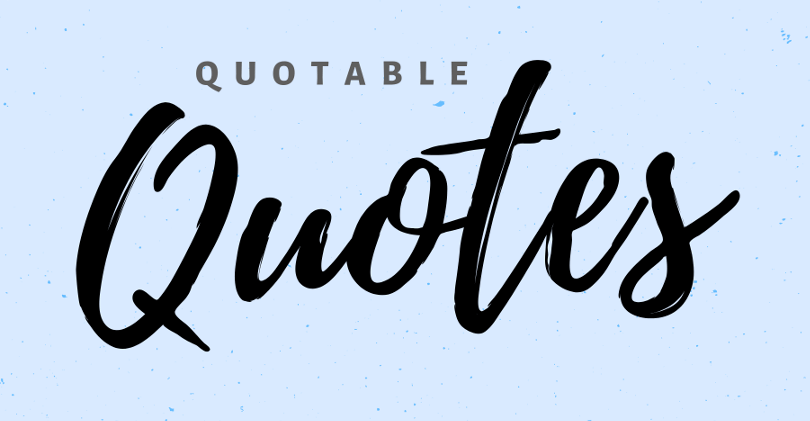 Here comes the second instalment of 25 hand-picked quotes that I’ve collected over the course of a year. I Hope you enjoy reading them!

“It’s better to keep your mouth shut and give the impression that you’re stupid than to open it and remove all doubt.” – Rami Belson

“When you want something, all the universe conspires in helping you to achieve it.” – Paulo Coelho

“The rarest thing in the world is a woman who is pleased with photograph of herself.” – Elizabeth Metcalf

“If you believe everything you read, you’d better not read.” – Japanese proverb

“The chief danger in life is that you may take too many precautions.” – Alfred Adler

“Life is not a problem to be solved, but a reality to be experienced.” – Soren Kierkegaard

“Conquering the world on horseback is easy; it is dismounting and governing that is hard.” – Genghis Khan

“Think of and look at your work as though it were done by your enemy. If you look at it to admire it, you are lost.” – Samuel Butler

“Love is blind, but marriage restores its sight.” – Lichtenberg

“My life has no purpose, no direction, no aim, no meaning, and yet I’m happy. I can’t figure it out. What am I doing right?” – C. Schulz

“You can catch more flies with honey than with vinegar.” – American proverb

“The temptation to quit will be greatest just before you are about to succeed.” – Ancient Chinese proverb

“Disobedience is the true foundation of liberty. The obedient must be slaves.” – Henry David Thoreau

“You can’t be lucky all the time, but you can be smart everyday.” – Mos Def

“Out of life’s school of war: what does not destroy me, makes me stronger.” – Friedrich Nietzsche

“A minute’s success pays the failure of years.” – Robert Browning

“Assumptions are the termites of relationships.” – Henry Winkler

“If we believe absurdities, we shall commit atrocities.” – Voltaire

“Let us never negotiate out of fear. But let us never fear to negotiate.” – John F. Kennedy

“To achieve victory we must mass our forces at the hub of all power and movement. The enemy’s center of gravity.” – Carl von Clausewitz