Timeline: Jan 15 – Jan 19
I reached the port city on Sunday evening, on the very comfy Shohag Volvo Bus. I stayed at Asian SR Hotel this time, and I’m extremely happy about their service. It’s very apparent that the hotel authority has taken extra special care in training the staff. The room was great, so was the food! The hotel has a bar as well, and I tried out some Chinese liquor!
I’ll skip the reason why I went there, since it will only bore you. Instead, I’ll leave you with a few impressions and observations I had about the city of Chittagong. 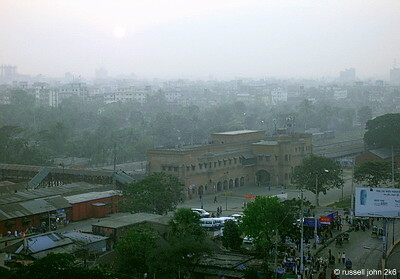 – With so many small and not-so-small hills around, the natural scenery of the city is a truly magnificent. It’s an old city, and the buildings and the oak trees bearing the sign of it. One of the attractions of the city is Patenga sea beach, which is about 10 km away from downtown. This small beach has increased the beauty of the city by a large scale. Foy’s Lake is another attraction, and it’s a very romantic place to visit!
– No offence, but people in Chittagong speak in a weird dialect! I should better call it a language, since it has a very little similarity with Bengali. If Sylhety and Dhakaiya is considered a language, then it should be counted the same way.
– Since there are numerous hills all over of the city, setting up point to point wireless connectivity can be very tedious and expensive. Putting up a 180 feet (almost 55 meter) tower on top of a 10-storied building is a lot of money! In case of DSL/ADSL, cables get stolen regularly and therefore the ISPs only provide connection within 1.5 km diameter of their POP! One ISP guy told me that their fiber optic cable got stolen! How pathetic!
– Chittagonians seemed to be very conservative (read: Islamic). Foreign Muslim preachers stayed this part of the world since centuries (they used to come mostly from Middle East on waterways). I’ve seen a very few young women on the roads, even in the posh areas of the city. Most of the women wear borkas, which is an Islamic dress (usually black) that covers the entire body except for fingers and eyes. I always thought men hated shopping, but Chittagonian men seemed to do it with a lot of enthusiasm! Since I found guys buying sari, cosmetics and ornaments, I’m sure they lock their wives at home and buy the ladies’ products themselves! Very strange breed of men! Another important point of their conservativeness: I found only a handful couples dating around at the parks or at the romantic hillside spots.
– There are too many graveyards around, at least one in every five kilometers. What a terrible waste of land!
– When I went to Chittagong for the first time in October, when the CNG 3-wheelers didn’t had fair meters. Transport authority forced them to install meters, but the drivers don’t want to use them since it wouldn’t be possible to overcharge the passengers any more! Fucking thieves!
– Since there isn’t much cars around, there isn’t any traffic jam in the city except for the road in front of the sea port, and it’s a valid reason. But still, this jam is nothing compared to the jams of Elephant Road, Mogbazar, or Motijheel in Dhaka!
Any how, I’m way too tired now, and I seriously need to get some sleep. Before I go to bed, here’s a little yucky fact for you guys:
Chittagong, also known as Chattagram, Chatgaa, and Chattrala has the largest homosexual population in Bangladesh!