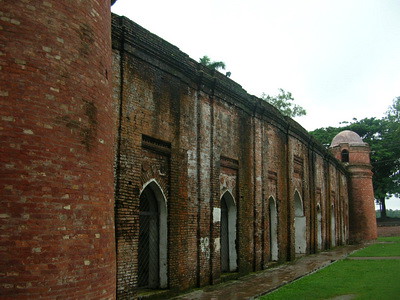 I stayed overnight at Khan Jahania Gono Bidyalaya, which is less than a kilometer away from the famous Shat Gombuj or the “Sixty Dome” Mosque. Contrarary to it’s name, the Mosque doesn’t have sixty domes, but a total of eighty one. Seventy seven domes are over the roof and four domes are on four corners. There are sixty pillars supporting the mosque, and that’s how it got it’s name. Built in 1459 entirely with stones and red burn mud, the mosque measures 160′ x 108′ and the interior is beautifully decorated with terra cotta.
Bagerhat Museum is just beside the mosque, and it has quite a good collection of local antiques, mostly pottery and terra cotta.
The burial place of Khan Jahan Ali was near too, and I gave it a visit. My guide was a local electrician cum folk singer cum painter who has a very good relation with the people taking care of the burial place, or the maazar. The scenario inside the maazar looked a lot like what goes on inside Hindu temples. Some people have turned this sacred place into a business venture, and charges money from the visitors. I didn’t had to pay anything since my guide was their friend. The religious radicalism surrounding this place has got nothing to do with Islam.
Beside the burial lies a very big pond called “Thakur Dighi” and guess what’s in there! Crocodiles! Yes, dozens of crocodiles! They lived there for more than 500 years, and my understanding is that their ancestors were brought from Persia or Arabia by Hazrat Khan Jahan Ali. Interesting, huh?