Location: German Club, Gulshan 2, Dhaka
State of mind: Intoxicated
It was a night of funky jazz tunes that probed us all into the highly diverse repertoire of prolific German drummer Wolfgang Haffner and his band. The quartet played cosmopolitan jazz music for one and half hour in front of few hundred audience, among which two-third were foreign diplomats. The Bangladeshis who were present all seemed to be affluent high society members. The old haggards who were there were all accompanied by ladies half their age. Mysterious, very mysterious.
The pool-side porch was literally jam-packed with audience, with a very little space to move around. I was lucky enough to get space on the front side, but I had to squeeze myself between two “deshi” and two “bideshi” girls. I enjoyed the music so much that I didn’t even bother to ask their phone numbers… big mistake. 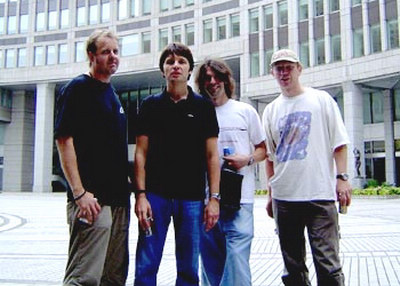 The concert was organised by Goethe-Institut Dhaka, and it was a part of Haffner’s “Shapes” tour in South Asia. Haffner played drums, Christian Diener and Frank Kuruc played electric guitars, and Sebastian Studnitzky played keyboard and trumpet. We were told that Haffner performed in more than 50 countries in the last 20 years, and appeared on over 350 albums by various artists. He also released 11 albums of his own! According to this talented drummer, his inspiration comes straight from his musical heart. This quartet’s next concert will be held day after tomorrow in Kolkata, India.
Realisation of the day:
Alcohol + hot ladies + live music = totally intoxicating experience. 😀